The editorial team behind American West picks some highlights from the collection.

An alleged photograph of Calamity Jane on horseback

Inscribed under the photograph in pencil: "Calamity Jane". Further inscribed on verso: "To my sweet Everett from his Sweetie Pie "Calamity" Jane. 1888".

Handwriting analysis suggests that the inscription was in fact written by Edward Eberstadt, a book seller who specialised in the history of Texas and the Southwest. 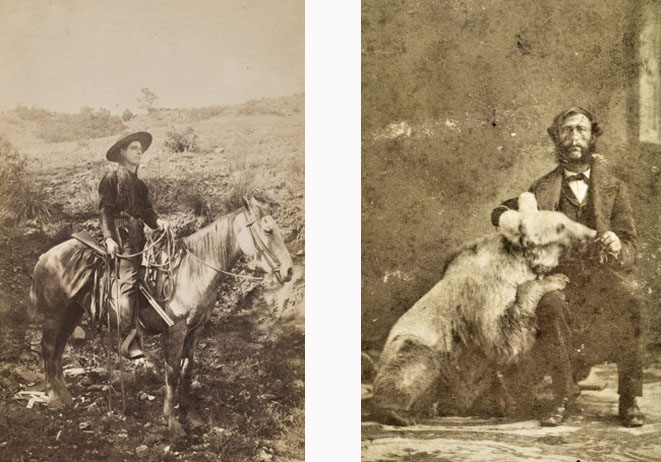 Inside this volume – fascinating in its own right – is an original photograph of Adams and a grizzly bear. The 'Life of J. C. Adams' was prepared as publicity at the time Barnum exhibited Adam's collection of wild animals in New York. There are two editions of the work, the earlier containing only 29 pages of text. 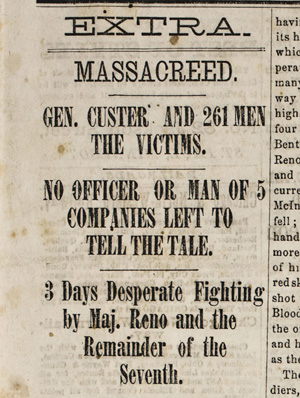 The account of the Custer battle occupies four and one-half columns on the first page of this newspaper, though the account was also printed as a broadside, probably on the same day.

General Terry wrote a dispatch to his superior officer on June 27th which was sent with Scout Taylor via the riverboat Far West. Taylor stayed on the Far West until it moored at the mouth of the Big Horn River on the night of June 30th. He left the next morning for his long ride of 175 miles to Fort Ellis and Bozeman, the latter place being the nearest telegraph station.

Taylor's story was first published in eastern papers on July 5th. The Terry account did not reach the public until July 7th. The Far West, carrying the wounded and Captain Smith with confidential dispatches for General Sheridan, moored at Bismark on July 5th at 11pm. The first complete account of the Battle of the Little Big Horn was published in the 'Bismarck Tribune' on the morning of July 6th. The Taylor story consisting of a dozen or so lines, was published in the Helena 'Independent' and several other western papers. Colonel Lounsberry, in his 'Early History of North Dakota...' 1919, states that the first publication giving substantial information came from Bismarck and that, aside from a bulletin (five lines) sent by the 'Tribune' to the 'New York Herald' and which was printed on July 6th, the first account was published in the Bismarck Tribune.


The cowboy: his characteristics, his equipment, and his part in the development of the West

This rare book from 1922 is a history of ranching in the West, but it also includes fascinatingly detailed specifics on the types of saddles, techniques of branding and breaking horses, and the lifestyle of ranch workers. As one of the factors that kick-started the early western economy, this historical account of the “beef bonanza” is an ideal reference.


Those interested in the many meanings attributed to the imagined figure of The Cowboy in contemporary culture might particularly enjoy the chapter on the “cowboy character”. As it reflects on the ranch worker as archetype, already acknowledging its place in the fictional imagination, it gives typical personality traits, including, “necessary courage... uncomplainingness – cheerfulness – reserve towards strangers”.